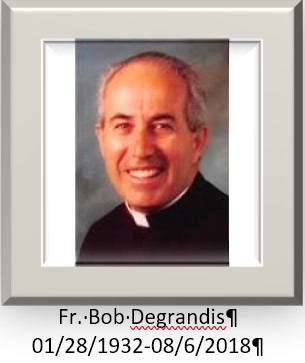 A BLOOD HEALING
CIRCA 1981
In 1981 I and my wife Suzanne volunteered with the Word of God Ministry in Salem, MA which sought to stir and plant an evangelical spirit among Catholics stemming from synthesizing the documents issued by the Church following the Second Vatican Council (or, Vatican II), as well as committing to parish missions and other ministry outreaches. On one occasion, in preparation for these missionary efforts a staff retreat in Florida was planned for the ministry’s leadership team which would also be attended by two priests who supported the outreach efforts of this ministry. These priests were Fr. Jack McGinnis and Fr. Bob Degrandis. Fr. Jack was the author and promoter of the Two By Two Before Him program of evangelization based on the documents of Vatican II, and Fr. Bob was the well-respected author of many—as well as a priest noted for having the gift of healing.
Upon our arrival in Florida we all settled in and began a series of planning meetings regarding the outreach ministries of the Word of God Ministry—all rooted in daily prayer and intercession. On one occasion we all attended an outside Mass with Fr. Bob as celebrant. It was a warm summer evening and we all sat in a semi-circle before the table which served as an altar. During the Mass Fr. Bob stopped for a moment and said: “Is there someone here that feels a flow of blood throughout his or her body?” Just prior to his question I had noticed a peculiar energy flowing throughout my entire body and I timidly raised my hand in response to his query. He then said: "You have just been healed of a blood disease." At the time, as I considered my health to be very good and was unaware of any blood disease issues, all I could do was to acknowledge this mysterious announcement. Following Mass no one approached me regarding this amazing declaration—and I did not even discuss it with my wife. I simply allowed it to rest on my heart—quietly trying to comprehend its mysterious meaning.
For many years following this puzzling event (which I never questioned as invalid) I continued to wonder about the nature of this declared miracle. Well, both clarification and verification would eventually present itself in a rather remarkable way. As it happened, I was scheduled for an annual physical exam which for some reason included a more extensive blood regiment. Following this exam I was informed by my primary care physician that my blood contained a marker for leukemia and that I was at risk for this disease. I was then referred to an Oncologist who arranged for a series of extensive blood tests regarding this marker and I expected the worst. Yet, following these blood tests, and to the amazement of my Oncologist, the marker did not matriculate and remained inert. This was an aha moment for me sensing that this was the nature of the miracle announced by Fr. Bob many years before at the healing Mass.
Then, due to a change in insurance, I was again referred to another very well-known Oncologist regarding my blood condition. When scheduled blood tests continued to validate an stable diagnosis he thought it best to schedule annual visits to monitor my condition. Faithful to this request, I appeared annually for a number of years and the diagnosis remained consistent—the marker remained inert.
Finally, upon retirement and following my move to New Hampshire, I was again referred to an Oncologist with whom I shared my past history. During that visit he ordered a full set of blood tests, an ultrasound and x-rays—and as in the past—the leukemia marker was diagnosed as inert and I was not scheduled to see him again.
So, what do I make of this miracle?
Why, I quietly rejoice and remain grateful for the grace of healing offered me on that remarkable day—so many years ago.
1